December is here which means it’s now considered acceptable to be full on Christmas spirit! But, if you’re like me. Then you’ve been all holiday cheer since November 1st. I have a tendency to go straight from jack-o-lanterns and fake cobwebs to garland and stockings. I’m not even a little embarrassed. Do you go full on holiday season in November? Or do you wait until December 1st?

1.My birthday is in the beginning of the month and this one was a big-ish one. The big 2-5. Quarter of a century. I celebrated with friends and we went to on of our go-to spots for dancing in Minneapolis. Better yet, they were having a 90’s themed night. My jam. Team Backstreet Boys for life.

2. The biggest highlight of the month by far was the adoption of our new puppy, Gus! Marcus and I had been discussing getting a dog for a while and although this was a bit sooner than we expected, when we saw (and met) Gus we knew he was a perfect fit! Almost every morning I was religiously checking Petfinder to see the new rescue dogs that were popping up. And the Thursday before my birthday weekend Gus (formerly Buster) popped up. We fell in love. We immediately called the shelter and asked to come and see him. So we spent the day of my birthday driving about an hour north of the cities to visit Gus and decide if his temperament was a good fit. And it was! He was so gentle and friendly. Then less than a week later we were able to bring him home. Going from a party of 2 without so much as a houseplant to taking care of a puppy has certainly been an adjustment :). But we are so in love with our 4-legged child and excited to get to know him as he grows.

3.Although much of November was spent at home with Gus (I may have cried a little when we left him at home for the first time. total dog mom), we did manage to get out and about a little. One Friday night, Marcus surprised me with tickets to the Timberwolves game. It was Prince night which meant lots of great Prince songs, lots of purple, and a killer half time performance.

4. Following in the sports theme, we also spent a Saturday attempting to relive our college days. A group of us bought tickets to the University of Minnesota Gopher football game. And just our luck, it was a chillyyyyyyy Saturday. So what better way to warm up than with some cheap beer at a few college bars? Man, did it make me feel old 🙂

5. Now back to the dog mom thing. I knew that Gus would grow super quickly so I wanted to make sure we had lots of pictures with him while he was still little. So I convinced Marcus that we should hire a photographer to do a little photoshoot with Gus. And boy was it worth it! These photos were just a few weeks ago and he already seems SO much bigger than he was. 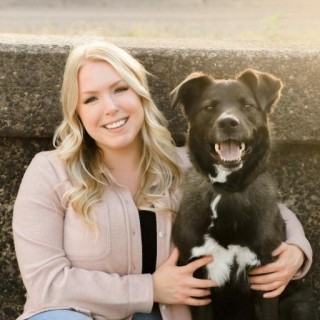 Hi! I'm a food blogger and dog mother that believes life is all about balance. I love developing approachable, everyday recipes that even the most amateur cook can make.